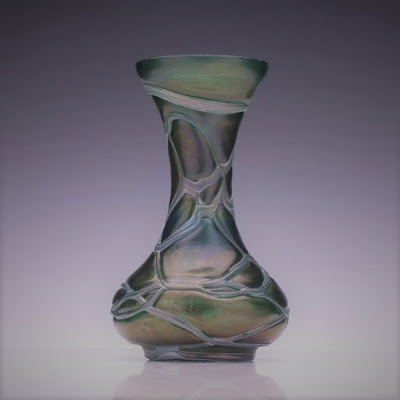 
Carole put the last book into the box, closed, then sealed it with packing tape. “Done, done, and done,” she said proudly. “Just in time for lunch too. All that's left to do is load the truck, drive to Goodwill and drop some of this off, then take the rest home. I bet we make several hundred dollars on eBay for these items.”


“I’m glad your uncle kept the good stuff in the original boxes. I say we’ll do as good as a thousand dollars," Jerry said as he kicked at a pile of crumpled newspapers on the floor. “Ouch!” He groaned and rubbed his toe then knelt to pick up the item he kicked. “What in the world?” He held up a large, iridescent vase with silver veining.

Jerry inspected the fifteen-inch-tall, blue-green iridescent vase and repeated her words – "doorstop? It looks like a vase or an urn."


“Well, obviously it’s a vase. Urns have lids, but someone filled it with cement, and now it’s only good as a doorstop. At least that’s what Uncle Joe used it for. Although he did say it’d been in the family long before he came along.”

“Is it worth anything?”


“Sentimental value only. The appraiser said any value became moot when it was filled with cement.”


“I’d like to keep it. It’ll remind me of Uncle Joe and his crazy stories. He used to tell some doozies, and I swear that vase would get brighter the spookier they were. It’s funny that you mentioned an urn. Uncle told a story about that once.”


"Sorry, my mom called me out of the room that day. But like I said, he had all kinds of stories."


Jerry scrutinized the vessel. “Really odd, but it is attractive, in a macabre sort of way. My toe did some damage but only to the cement at the top. There’s a crack, or was that there before?”


“Nope, that’s new,” Carole said as she checked the top of the vase. Sure enough, a crack about a half an inch appeared in the center of the cement that was an inch from the top of the vase’s neck. “Come on, let’s get this stuff delivered to Goodwill and get some lunch.”


Jerry finished unloading the last of the boxes from Uncle Joe’s then retrieved the vase from the back seat. He rubbed his finger across the crack and decided to investigate further. He grabbed a large file off the workbench and got to work. In an hour, Jerry had created an opening of over an inch. It was long enough and wide enough to stick a half-dollar into. But the most exciting thing he found when filing into the cement was that the bottom of the bottle was hollow.


"I just turned our doorstop into a bank." Jerry pulled a John Kennedy half dollar from his pocket and dropped it in. The next odd thing was that it didn’t make a sound. The coin just disappeared into the slot. When he shook the vessel, it was still silent. “Must be something softer inside.” he decided, as he polished the exterior and made it shine, especially the silver inlay.


Carole took the vase from him and laughed. “If we put money in there, how do we get it out?”


“What if we put all our silver Kennedy half dollars in it. We have a small collection of them, and we always planned to hand them down to our kids. We’ll fill it up and leave it as an heirloom.”


“I like that,” Carole said and sat the vase in a special spot on the bookshelf. “In honor of Uncle Joe! Our first family heirloom.”


***
That night, a dark gray cloud of smoke rose from the blue-green iridescent vase, and with it, the silver dollar floated out and plopped to the floor. The darkness swirled and circled the room, floated down the hallway, and entered the master suite. As Jerry inhaled, the gray smoke entered his nostrils and disappeared.


At 6:00 A.M. Jerry awoke to find his wife, Carole, dead beside him. She’d been eviscerated, dismembered – murdered! He was covered in her blood and held her heart in his hand.


"Well Detective, what do you make of it?” the coroner asked.


Detective Martin shook his head. “The butcher knife was found under his pillow. No sign of a break-in. No blood anywhere else in the house. Yet, he claims he’s innocent."


“But how do you kill like that then just fall asleep in the middle of it?”


“Rage? Maybe he wore himself out? Someone with more knowledge than I have is going to have to answer that question,” the Detective acknowledged.


In prison, on death row, Jerry re-lived each moment of the murder. He saw every detail, recalled the thrill of each stroke, but especially the way his knife sliced through her body like a blade through butter. But mainly how satisfying the final cut to Carole’s throat had felt. Then as the blood flowed, how he celebrated and allowed himself to shower in the spray of it. He saw it clear as day, but he had no control over his own actions. The worst of his nightmares were of the other murders. All women from Whitechapel, London. He even knew their names, Mary Ann, Annie, Elizabeth, Catherine, and Mary Jane.


A defense of insanity didn't convince the jury.


Jerry gave over to the death that awaited, knowing that soon, Jack the Ripper, would strike again.


The vase went to the highest bidder and sold for twenty-five cents at an auction to help pay for Jerry’s attorney fees.