Sheila invited her best friend to join her for a cup of tea in Central Park. She even volunteered to bring the tea with her. A quick stop at Starbucks and the two women were sitting on a park bench feeding the pigeons and talking about their plans for the weekend.

Sheila answered her ringing phone. A look of concern changed her countenance as she listened to the caller. Lydia looked up and mouthed the word what.

"I'll be right there," Sheila,  said with a deep frown on her face. She looked at her friend. "Sorry, looks like our shopping trip is out."

"Some stupid emergency at the office. I have to run, sorry, but you'll be over tonight for dinner, right?"

"Wouldn't miss it."  Lydia stood and took a final drink from her cup. "There's something different about this tea, but I can't put my finger on it. It's still good, though." 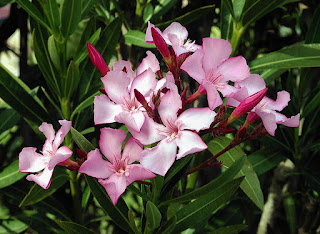 "They didn't have your regular sugar, so I used Stevia. Maybe that's it?"

"Stevia." Lydia looked concerned then said. "I'd heard that was a good sugar substitute, but I had no idea it'd be this good. Nice accident." She finished her tea, threw the cup into the waste receptacle, and waved goodbye.

Sheila headed in the opposite direction.

Once Lydia was out of sight, Sheila retrieved the cup Lydia had thrown away. She replaced it with another cup she'd made sure had Lidia's fingerprints and DNA. There'd be no evidence of poison if they looked.

At the office several hours later, Sheila broke down when she learned her best friend, Lydia, had died in a car accident on her way home from the park.

You won't sleep with my boyfriend again, stupid slut. Sheila thought but smiled behind her hanky. Her coworkers circled around her to express their sorrow.

FYI:
Flowers can kill, and you may have one or two of those killers in your own garden. Nightshade, Daffodils, Angels Trumpet, Monkshood, White Snakeroot, and Foxglove are just a few that you can make a deadly tea with.

If you're interested in learning more just Google deadly flowers.
I'd post the link here but I've begun to worry about downloading viruses.

Sheila used Oleander to flavor her deadly tea. And it looks like Lydia isn't her only victim. Visit next Monday, when we discover her latest victim and the weapon she chooses.

Which flower would you use to flavor your deadly tea?